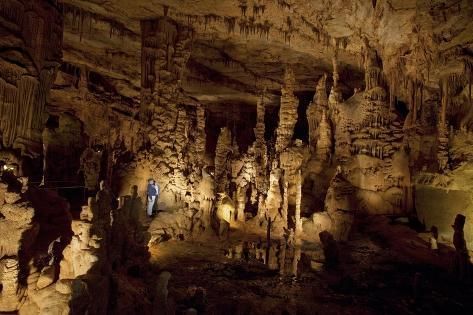 Bats Cave was created as a tourist destination in the 1950s. In 1972, Cathedral Caverns was designated a National Natural Landmark, and in 2000 it became a state park.

Picnicking and cave excursions are available at Cathedral Caverns State Park, in addition to gem mining.

There is only one backcountry campground in the park, as well as both developed and unmanaged campsites. In 1983, the caverns were used as a location for the horror film The Secrets of the Phantom Caves.

Only experts are allowed to venture off the established route; 11,000 feet of the cave have been mapped and explored. The cave has several notable characteristics, including: Native Americans lived near Cathedral Caverns as recently as 200 years ago, and as far back as 7000 BCE. A family named Kennamer colonized the region, and it became known as Kennamers Cove.

The Kennamer family lived in the cave for a lengthy amount of time during the Civil War, after Union troops burned down their homestead. Jacob “Jay” Gurley operated the cave as a tourist attraction beginning in 1955 until 1974.

The cave was sold at auction in 1975, and in 1987, it was purchased by the Alabama State Government, who started restoration work in 1995. In 2000, the cave was reopened to the public as Cathedral Caverns State Park.